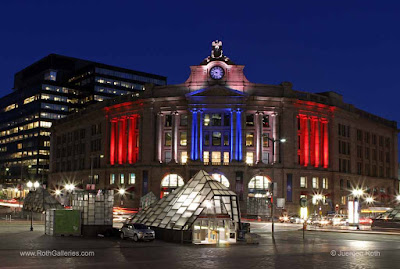 This Boston Night Photography image shows another historic Boston landmark: Boston South Station. The architectural marvel is a busy bus and train station built in 1899. The Train station replaced several terminals located in downtown Boston. In the evening the station shows a patriotic display and is illuminated in red, white, and blue. I had this urban scene on my bucket list for many years and finally made my way over to capture it last week. I out most of the traffic because it is distracting and not adding much to the composition. Instead I focused on the patriotic colors and the unique architecture of the building. Upon arrival I tried different perspectives and finally succeeded while the evening twilight was about to fade away.