Post sunset is one of my favorite times to take photographs; this applies to landscape as well as city skyline Photography. I regularly go out and capture the Boston City Skyline at twilight on days that I am not occupied hunting for nature photographs. The best time is 20 to 30 minutes after the sun has set. The optimum light and magic of twilight does not last long. Because twilight is hard to predict I set up my tripod and camera prior to the actual sunset and then fire away once the sun sets and disappears. This approach requires sufficient battery power and flash card memory to keep shooting while closing in on the optimum light. The Twilight Effect also works on cloudy days and really long exposure times are not unusual.

The other day I set up on the parking garage of Boston Science museum. It is one of my favorite locations and I love to see the sunlight fade and the city lights come to life. This day I went straight to work and kept on photographing the City Skyline of Boston while the sun was setting and disappearing. I included in the composition the skyline reflections and such Boston landmarks as the Longfellow Bridge, Prudential Center, John Hancock building and placed the Charlesgate Yacht Club as a foreground feature. The exposure of the photograph was timed to to coincide with the Boston T subway crossing over the Longfellow Bridge. At ISO 100, the aperture was set to f/4.5 resulting in a 10 second exposure time. In the post processing steps I removed dust spots, minimally adjusted lighting and color saturation before sharpening.
Posted by Roth Galleries 19 comments:

Anatomy of a Lily Flower 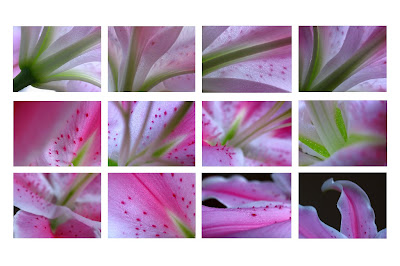 Photo of the Week - Hygrangeas 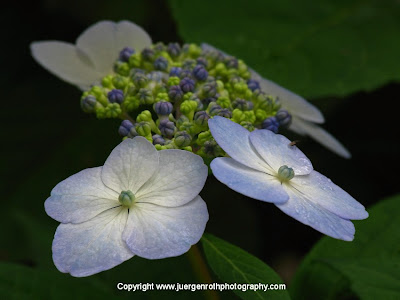 This week's photo of the week is Hydrangeas showing local New England flower photography in full bloom. Juergen applied the rule of thirds for the composition and a Polarizing Filter to saturate colors and remove distracting glare on the flower petals.

Starting today through the week of 14 November 2011 this Flower Photography image, available as art print or on canvas, is on sale. 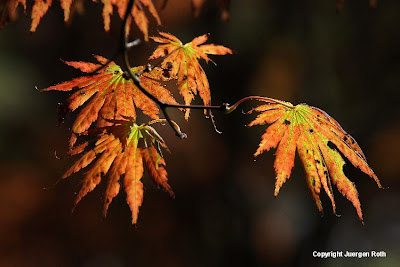 I love when the morning or afternoon sunlight strikes and illuminates the colors of fall foliage. In this photo of maple tree leaves from the inspiring Boston Arnold Arboretum I isolated a branch with four maple leaves in peak autumn colors. The leaves were sun-kissed while the background made out of shrubs and other tree foliage remained mostly in the shade. I used a Polarizing Filter to further darken the shadow parts, adding more drama and enhancing the natural green, yellow and orange colors. The polarizer also eliminated any unwanted and distracting glare on the foliage. A 70-200mm lens, fully zoomed in, produced the limited Depth of Field and background bokeh that I had envisioned, laying the attention solely on the beautiful fall colored foliage. At first, the wind was kind of a problem but increasing the ISO from 100 to 200, lots of patience and multiple exposures guaranteed a useable photographic capture of this beautiful autumn scenery. The higher ISO setting allowed me to set a camera aperture of f/8 and provided a shutter speed of 1/200 second. I chose to underexpose by 1 full stop to saturate and intensify colors. During post processing I removed dust spots, minimally adjusted contrast, lighting and color saturation before sharpening the final Fall Foliage photography image. 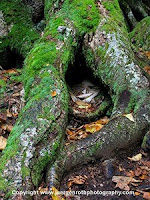 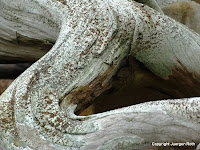 Human forms in nature is something I always look for when I head out into the field. It all started in the White Mountains of New Hampshire when I stumbled upon roots that appeared very human; in fact like a "Resting" person lost in the woods. Once hooked I continued the quest and made it now a lifelong project. More recently I found someone "Crawling" on Little Hunters Beach in Acadia National Park and "Strolling" in the Boston Arnold Arboretum. 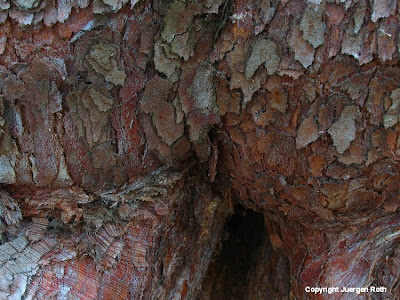 Macro Photography of a Raindrop

Originally I was shooting for raindrops on leaves in the Boston Arnold Arboretum but the wind made it impossible to capture a sharp image that day. I then started focusing on the ground where I was looking for a raindrop on a blade of grass with a decent background to use. Not far from where I hoped to find raindrop covered leaves, I was able to pin down a decent sized raindrop that was in front of a large orange leaf. As expected the wind was not that imminent at ground level and I exposed multiple images to ensure I capture the colorful autumn like droplet image I had envisioned. The setting is shown above and I originally wrote about the final image, technique and circumstance in my blog "I love the rain". Thought it's worthwhile sharing the tiny landscape setting I found in addition. 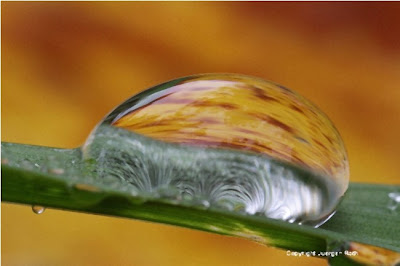 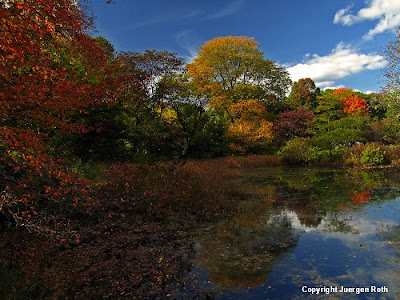 This week's photo of the week is "NE Fall Foliage" showing the Boston Arnold Arboretum in peak New England fall foliage colors. Juergen used a polarizing filter to saturate colors and remove distracting glare on the leaves and to boost autumn colors in this landscape photography setting.

Starting today through the week of 07 November 2011 this image, available as art print or on canvas, is on sale. 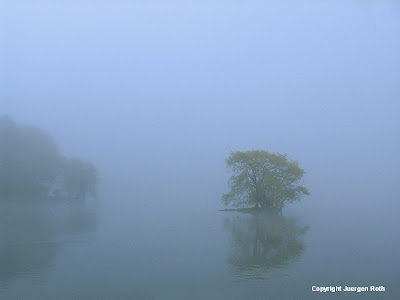 Since the first time I saw this tree in the middle of Jamaica Pond I have been fascinated by it. My wife and I sometimes walk around the pond for a stroll and I often thought about how to capture this tree at its most beautiful. I never succeeded or even really tried since the shoreline behind is covered with the boat house and residential buildings. In 2009 though, on a foggy and misty morning in Boston, I decided to make my way over to the Boston Arnold Arboretum for a photo excursion. When I turned the keys to start up my car that morning I already knew that I was in for a special landscape photography treat. When driving up the road leading to Jamaica Pond I saw heavy fog across the pond. Excitement immediately rose and a smile crossed my lips. While finally turning around the corner to the main pond road the perfect picture arose out of fog. Best of all there was no distracting background. I instantly made a u-turn to park the car, pulled out my tripod from the trunk and walked down to the shoreline and followed the dirt path around the pond looking for the best composition. I didn't need to walk far and only a few joggers passed me on that early morning. I set-up the tripod, composed my image off center to include the tree reflection and part of the tree-lined shoreline. The focal length was set between 28 and 35mm, aperture setting was f/5.6 resulting in a shutter speed of 1/15 sec. Once I knew I had my image I took a deep breath of joy and moved on to my original destination, the Boston Arnold Arboretum.
http://juergen-roth.artistwebsites.com/featured/jamaica-pond-juergen-roth.html
Posted by Roth Galleries No comments: