During my last photo trip to southwest Florida I encountered a Black Crowned Night Heron in a little marina of Estero Bay in Bonita Springs. The photo location is near the Koreshan Historic Site which is part of the Florida State Park system. The bird was perching on a boat while lit by the very early morning light. I was looking for an attractive portrait of the bird this morning and had to get into a decent range for a frame filling capture. I equipped my camera with a Canon EF 70-200mm F2.8 L IS USM and Canon Extender EF 1.4x III and decided against tripod use and instead handheld my camera gear. That way I figured I would not stress and scare the bird away when carefully moving closer towards a tighter composition. Once I was in striking distance I started composing around the bird and applied some of my own Bird Photography Tips. Originally I was trying to isolate the bird against the blue sky but did not succeed. There was too much distracting boat and harbor features in the frame and instead I used a mooring pole as a pleasing and calmer background. I decided on a low camera level and then laid the focus on the beautiful orange eye, applying sufficient Depth of Field for a razor sharp bird portrait while leaving the background in blur. An out of focus background solely drives all attention to the bird and is most suitable for bird photography and bird portraits. Composing with space in front of the night heron in the direction the bird is looking created some kind of tension that I desired in my final image. The nice posture by the bird rounded out the image. An aperture of f/4 combined with an ISO100 setting created a fast shutter speed of 1/1250 seconds that allowed for a sharp and crisp handheld image. During post processing I removed dust spots, minimally adjusted lighting, contrast and color saturation before sharpening the final picture of the Black Crowned Night Heron. 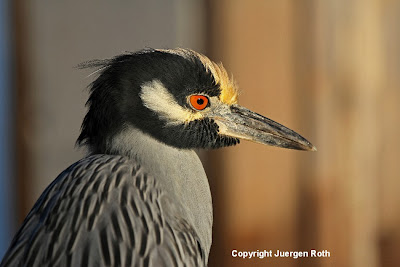