I love New York ~ the City that never Sleeps 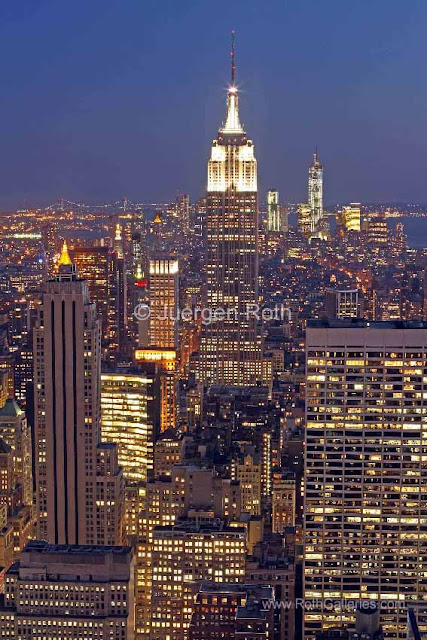 The other week we visited family in New York City. For quite some time I was planning to explore the skyline photography opportunities from the top of the Rockefeller Center. Before we left on Thursday I checked the weather forecast for clear or sunny to cloudy condition and since positive, I pulled the trigger and bought a ticket online for Friday at 6:30 pm. Equipped with my entire gear, except my tripod (not allowed), I made my way over the entrance to the Rockefeller Center on 55th street between 5th and 6th avenue. There was a small line for buying tickets which I was able to skip due to my advanced planning. The elevator line was small and after a 5 minute wait I made the 45 second trip to the viewing platform on top of the Rockefeller Center. I went straight for the second floor platform as there are no protecting windows in front of you and one has an open view of the midtown and downtown New York City. The cityscape views are amazing and one gets demanding views of the Empire State Building, midtown and downtown New York. To the other site Central Park and uptown lies in front. As I was way too early I checked out the views and once I decided I figured I make my way to the front row and see what happens. After securing the front row spot I never moved thereafter until well after sunset. Let me tell you, the location did not disappoint. Once the sun set and Twilight and City Lights became one the magic unfolded right in front of us. Since there are no tripods allowed I used the stone socket to rest my camera during the long exposures. Although I would have preferred my tripod this was a great substitution for higher quality photography images of this magnificent skyline and cityscape.

In the first picture I choose a portrait format to solely focus on the Empire State Building in front of me. The aperture at f/11 resulted in a 20 second exposure time at ISO 100. I usually select the lowest possible ISO at 100 as it provides lower noise levels and better skyline photography results. The second cityscape photograph shows more of the New York City skyline icons and besides the Empire State Building, the Freedom Tower, Bank of America building, Condé Nast building and the Statue of Liberty are seen in this picture.  The aperture in this cityscape photo was set at f/11 providing a shutter speed of 13 seconds at ISO 100. No filters were used in both images.

During post processing of both photographs I removed dust spots and minimally adjusted contrast, lighting and color saturation before sharpening the final city photograph of New York City and its magical skyline. Photography Art Behind the Scenes