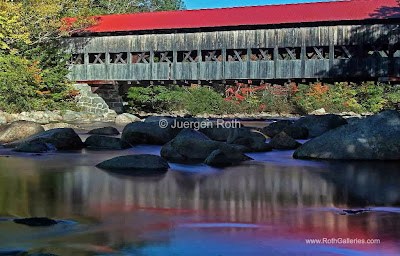 The Kancamangus highway is known as one of New England and America’s most beautiful and scenic byways. It is a feast for the nature photographer and outdoor lover alike. Route 112 is easily accessible from Route 93 north at the town of Lincoln, NH. At the end of the scenic byway not far from Conway, the Albany Covered Bridge is one of the last highlights. The wooden bridge spans across the Swift River and was constructed in 1857. Last week I captured the bridge with its red roof in the morning. New England fall foliage was in full swing and should be peaking this week and next weekend. It is a good time now to make your plans if you are into autumn photography and fall foliage peeping of this New England treasure. I made the trip end of last week and parked my car in the parking area near the covered bridge. I first explored the nearby banks of the Swift River incorporating the many rocks and boulders into my composition. From this side of the river it is quite a challenge to eliminate unwanted distractions and compose a pleasing image though. So I crossed the bridge and looked at that side of the river. The bolder I wanted to set up tripod and gear on was not accessible without getting my feet wet and slip sliding through the wet rocks; I passed. Not far downstream of the bridge I discovered a small pool slowly being filled by the river. I equipped my lens with a neutral density filter and wide angle lens. The filter combined with a low aperture setting provided a long exposure time of 25 seconds which enhanced the image with nice silky water effects and a beautiful red reflection of the bridge and its roof.  While setting up tripod in the river and on available boulders at a low level I decided to take off my jacket and open camera bag and placed all on nearby bolder. While juggling myself on a couple of other boulders I managed to adjust camera and lens to the desired composition. When I then turned back to grab the neutral density filter out of my camera bag the entire thing started slipping down the rock towards the water. At this point I frantically took a step into the river and saved the bag from sliding further into water. As it was still open the nightmare was not over yet but the worst prevented. I pulled the bag back up, closed it and yep, you guessed right, carried it again on my back. I can’t believe after all those years in the field I almost tanked a few thousand dollars worth of lenses into the Swift River.
The aperture in this picture of the Albany Covered Bridge in the White Mountains of New Hampshire was f/13. Combined with the aforementioned ND filter and ISO100, an exposure time of 20 seconds was achieved. During post processing I removed dust spots, minimally adjusted lighting, contrast and color saturation before sharpening the final photo image. 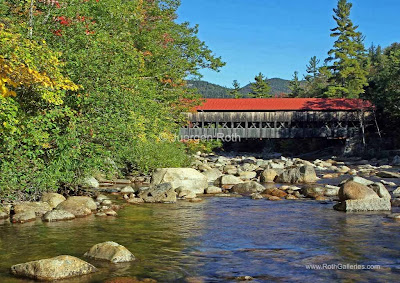