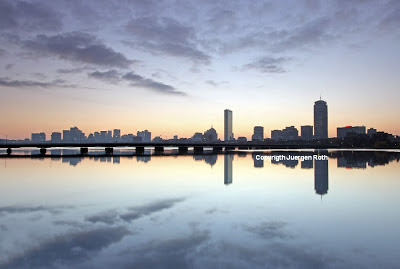 The other morning I revisited one of my favorite Boston Skyline Photography locations at the Charles River on Memorial Drive near the Mass Avenue Bridge and MIT. I like this spot because it provides a good view of Boston landmarks such as the Prudential Center and the John Hancock building. The Massachusetts Avenue Bridge spans from MIT over to Boston and leads the viewer into the city. The weather forecast called for a little bit of clouds and lots of sun that day. I was hoping for a beautiful morning sky filled with pink clouds above the Boston skyline landmarks. There was little to no wind that allowed for a wonderful sky and skyline reflection in the Charles River. At twilight the magic slowly but surely unfolded and the sky beautifully became alive. I was intrigued by the soft hues of dawn over Boston and how it reflected on the Charles River. Clouds became more visible and abundant while I kept photographing. Unfortunately the clouds had moved out of the frame once they turned pink that morning but instead I was able to photograph an unique tranquil Boston scene that has a minimalist feel to it and that I love.

Let see what tomorrow morning has in store for me!

More Reading and Photo Tips you may enjoy: