A Blast at the Portland Museum of Art 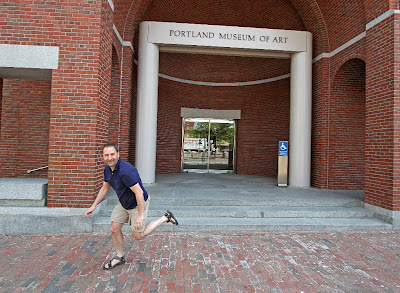 The other week we visited our family in Portland Maine. One stop on the short New England road trip was the Portland Museum of Art where we had a blast viewing the ongoing exhibition of "From Portland to Paris" by Maine artist Mildred Giddings Burrage. Her paintings were amazing and came as this bonus surprise when visiting the museum for another exhibit and then stumbling on these unbelievably stunning master pieces of art. The PMA website describes this beautiful, must see exhibit as follow: This exhibition focuses on Portland-born artist Mildred Burrage (1890-1983), who as a young aspiring painter traveled in the early 1900s to Giverny, France. There Burrage trained her eye on the landscape, creating oil paintings and filling sketchbooks with her Impressionist style. She wrote copious letters to her family back in Maine, detailing her adventures and providing vivid accounts of the artists, dealers, and distinguished figures whom she encountered, including French artistic legend Claude Monet and avid collectors Gertrude and Leo Stein. While Burrage was a prolific artist up until her death, this exhibition celebrates these crucial, formative years (1909-1914) when she traveled abroad and was introduced and exposed to modern European movements. Comprised of approximately 70 works of art, including paintings, drawings, and never-before-exhibited letters, this exhibition reflects a unique time of innocence, ebullience, and optimism in Mildred Burrage’s life and career, and in the American and European psyche before the onset of the First World War. This art exhibit runs from June 14, 2012 - September 3, 2012.

"The Draw of the Normandy Coast" was the other exhibition on display that was equally impressive. The PMA website describes this beautiful, must see exhibit as follow: The northern coast of France—and Normandy in particular—proved to be an artistic crucible for French and American painters during the course of the 19th and 20th centuries. Geographically convenient to Paris, accessible by train, with dramatic cliffs and rock formations, and picturesque and active ports, Normandy was an attractive haven. Realists, Impressionists, Neo-Impressionists, Fauves, Cubists, and Surrealists all gravitated to the area, including Claude Monet, Henri Matisse, Camille Pissarro, and James Abbott McNeill Whistler. This exhibition charts the coast’s significance and showcases the ways in which the landscape was rendered by a spectrum of artists. This exhibition explores the importance of the towns and villages of Honfleur and Le Havre, and such unique destinations as Étretat and features more than 40 works of European and American art, mostly paintings and works on paper, from the Portland Museum of Art’s holdings and from the private collection of Isabelle and Scott Black, and holdings from other generous lenders. This art exhibit runs from April 21, 2012 - July 15, 2012. 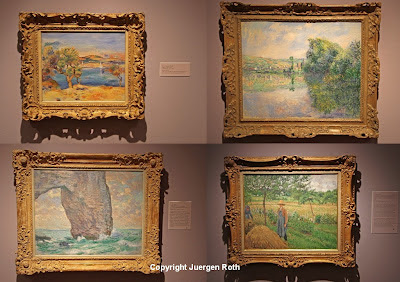