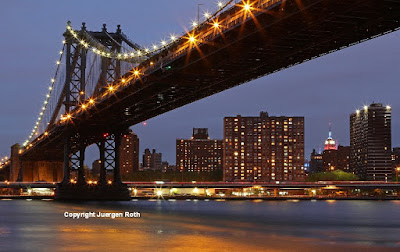 We spent a couple of nights in New York City last weekend where I got a chance to photograph a classic view of the lower Manhattan New York City skyline at twilight. The panoramic pic, showing cityscape landmarks such as Freedom Tower (it was the night before it became the tallest building in the Big Apple again), Brooklyn Bridge, East River and FDR Drive, was taken from the Brooklyn Bridge Park in Brooklyn, NY. The long wait finally paid off when the sky turned purple and the city lights were alive.

The second shot was taken from the same location and I took advantage of that view when passing boats did not allow for taking pictures of the Brooklyn Bridge and Manhattan skyline. City Skyline Photography at twilight is a Tricky Endeavor and we must be prepared and keep shooting during these precious moments after sunset. I like this picture because it shows more of the typical blue in the sky during twilight. The Empire State Building in the far distance gives the picture the extra something.