At the Boston Science Museum 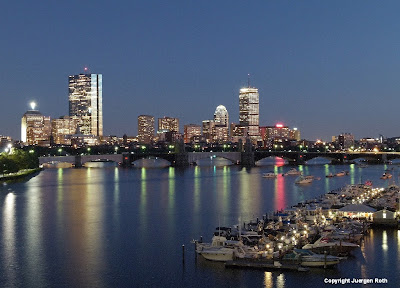 Post sunset is one of my favorite times to take photographs. I regularly go out and capture the Boston city skyline at twilight on days that I am not occupied hunting for nature photographs. The best time is 20 to 30 minutes after the sun has set. The optimum light does not last long. Because twilight is hard to predict I set up my tripod and camera prior to the actual sunset and then fire away once the sun sets and disappears. This approach requires sufficient battery power and flash card memory to keep shooting while closing in on the optimum light. The twilight effect also works on cloudy days and really long exposure times are not unusual.

Last night I set up on the parking garage of Boston Science museum. There is the Gilliland observatory that is open to the public free of charge on Fridays during the summer and I had a chat with the guy who opened the telescope to view the night sky and stars. He pointed out the international space station appearing over the Boston John Hancock building and then traveling above the skyline and disappearing under the full moon above Beacon Hill. Although only seeing a traveling light in the sky it was quite exhilarating to see. I then went back to business and kept on photographing the city skyline of Boston. At ISO 100, the aperture was set to f/5.6 resulting in a 15 second exposure time. In the post processing steps I removed dust spots, minimally adjusted lighting and color saturation before sharpening.