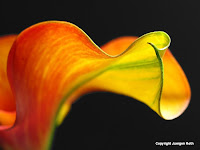 Recently I got my hands on a bouquet of four miniature Calla Lilies at a store around the corner. I am always drawn to Calla Lilies because of the elegance and forms of the petals that stand up as terrific macro photography objects. In addition this bundle also stood out in its bright orange hues which I immediately thought would beautifully pop in front of a black background. With the original goal in mind I set up my close up photography studio at home, chose one of the flowers to work with and placed it in front of a black backdrop. I first composed around the tip of the flower but then was pulled in by the forms of the petal. I laid the focus on the edge of the petal and adjusted to an aperture of f/3.2 resulting in 1/40 sec exposure time. The large camera aperture provided the desired shallow depth of field. In my second image of that day I changed the perceptive and zoomed in for a more intimate view of the Calla Lily flower. I also switched the backdrop to a more harmonizing one. In this case I used one of my favorites: the cover page of a Harvard Business Review magazine. The cover has this beautiful green and I have been holding on to it for many years now. There was a second lily in the upper right corner that because of the shallow depth of field completely dissolved in the background of the photograph. I composed around the forms and orange tones while using lines and edges to guide the viewer through the photograph. Aperture setting for this final dream in orange-green was set to f/4 providing a shutter speed of 1/50 second.