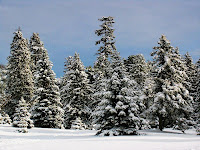 People often ask me about my locations and are surprised that most of my images are taken locally. The snow covered evergreens are pften assumed to be from Vermont. Never been there for the snow season. These evergreens are actually in the Boston Arnold Arboretum which is located the middle of Boston. It was a mostly cloudy day after a heavy snowfall and most of New England was under a beautiful white snow blanket. I went out early in the morning and walked through the snow looking for great photo opportunities. It was not the great photography adventure I had expected but when I was about to leave the sun came out for a brief moment spotlighting the evergreen near one of the main entrances. The magic moment I was hoping for finally unfolded in front of me. The dark clouds in the background provided more dramatic appeal to the image and benefited the overall composition. I quickly opened my tripod, with the camera already mounted on it, composed a pleasing composition and captured a round of images. The moment only lasted for seconds until the sun disappeared again behind the clouds. With 3 to 5 inches in the forecast for tonight I am thinking of going back to the Boston Arnold Arboretum tomorrow morning to give it another try. The forecast predicts snowfall over night and a partially cloudy morning. Perfect conditions!
Posted by Roth Galleries