On the BU Bridge 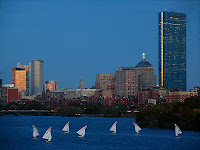 Post sunset is one of my favorite times to take photographs. I regularly go out and capture the Boston skyline at twilight on days that I am not occupied hunting for nature photographs. The best time is 20 to 30 minutes after the sun has set. The optimum light does not last long. Because twilight is hard to predict I set up my tripod and camera prior to the actual sunset and then fire away once the sun sets and disappears. This approach requires sufficient battery power and flash card memory to keep shooting while closing in on the optimum light. The twilight effect also works on cloudy days and 10-15 seconds exposure times are not unusual. I often set up on the BU bridge providing me with multiple challenges. First, there is the rush hour traffic that may cause shaking of the camera set up and therefore produce blurry photographs. Second, there are lots of pedestrians crossing the bridge and causing the same effect when passing by. And the final challenge is framing and composing the photographs in manual mode. In this photograph I decided to shoot landscape format and include the John Hancock building, a Boston landmark. I welcomed the BU sailing armada coming straight towards me because they added more interest to the foreground. The longer exposure time caused the sail boats to blur and added motion as well as an extra twist to the photograph. In the photograph below I used twilight to great effect in one of my nature photographs. 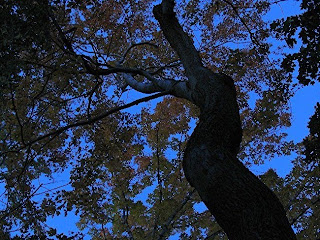