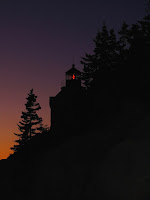 Last weekend I spent 3 full days in Acadia National Park in Maine. On my last day I was looking to shoot Bass Harbor lighthouse. When I arrived the place was a mob scene. Not totally unexpected, but still surprising to see probably 25 to 30 people on the rocks at the bottom of the lighthouse. Other photographers had already marked the perfect locations their own. I had no choice but to back up and walk across the granite rocks and set up further away. Of course I had the whole crowd in my frame but I also knew what I was waiting for, twilight. These morning and evening limited minutes provide exceptional light for glorious and dramatic landscape photography. So, I chilled out, like my daughter frequently suggests. I turned around to capture the red granite rocks painted by beautiful evening light while most people were focusing on the lighthouse and the sunset. Once the sun set, flashlights were lighting the scene and cameras were released left and right. After a few minutes, people started to leave, including most of the photographers. In the end there were just three photographers left, one who claimed the top spot from the start, one who got lost on the way to the location and myself. A fourth gentleman was enjoying a bottle of wine, amused that I praised my fellow photographer for arriving just in time to capture Bass Harbor light at its best. The three of us now filled up our flash cards with I believe some of the best Bass Harbor lighthouse photographs taken that night. 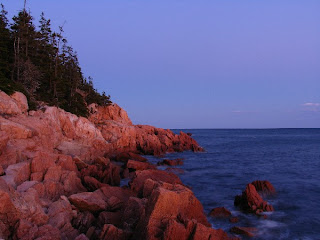