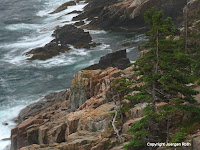 In this seascape photograph of the Maine rocky granite coast in Acadia National Park I was challenged by difficult lighting conditions due to the bright and misty ocean and the darker landscape scenery of the rocky coastline, cove and trees. I also was looking for an attractive silky ocean water effect and pattern in the incoming waves. I first metered on the coastline near the ocean edge but that provided too dark of a rocky coastline, cove and trees with limited detail in the trees and rock formation. On the other hand metering on the large tree provided decent detail in the granite rocks and trees but blew out the ocean leaving them washed out. As a solution I metered on the large tree that provided a correct exposure setting for the coastline area in the foreground with a slow enough shutter speed for a desired silky ocean water effect. Then I hand-held a 1 stop graduated neutral density filter in front of my lens, placing it near the edge of ocean and shoreline. Applying the 1 stop split neutral density filter reduced the incoming light on the ocean and dark rocks in the background to an amount that still showed enough detail, while the trees, cove and granite coastline in the foreground were correctly exposed for best impact.
From Wikipedia: A graduated neutral density filter is an optical filter that has a variable light transmission. Typically half of the filter is of neutral density (gray) which transitions, either abruptly or gradually, into the other half which is clear. It is used to bring an overly-bright part of a scene into the dynamic range of film or sensor. For example, it can be used to darken a bright sky so that both the sky and subject can be properly exposed. 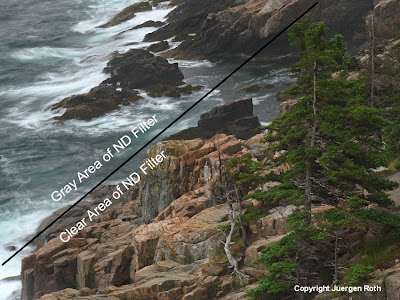